As we all know, change is unavoidable. This is certainly even more true for technology companies like Twitter. Recently one of the world’s wealthiest men purchased the social media giant valued at $44 billion. This purchase and the sometimes fiery debate leading up to it have been filling the news cycle since Musk first spoke of it around April 4, 2022. The Hollywood Reporter published an article discussing the matter, and quoted Musk as saying “Given that Twitter serves as the de facto public town square, failing to adhere to free speech principles fundamentally undermines democracy,” Musk wrote in one recent post before asking: “What should be done?” When someone suggested launching a rival, the businessman said he was “giving serious thought” to the idea.” His labeling of the platform as a town square is certainly accurate, being that town squares have been the central communication hub of communities for thousands of years. Mirriam Webster defines it as “the sphere of public opinion”, and definitions.net as “A town square is an open public space commonly found in the heart of a traditional town used for community gatherings.” Based on these definitions alone, it’s easy to see why Musk referred to Twitter as one.

The official reported filing date for Musk’s purchase of Twitter’s shares per sec.gov was April 13, 2022. The purchase of these shares gave him significant power in the company which the board of directors had to reconcile quickly. Musk wasted no time making his voice heard, and per endgaget he “posted a poll on the website asking users whether they want an edit button… Twitter CEO Parag Agrawal. “The consequences of this poll will be important. Please vote carefully,” Agrawal wrote, hinting that the poll could lead to an actual edit button on the social network.” As it turned out, over 70% of people liked the idea. If you look at a tweet now, after it’s been created there are three vertical dots on the right upper corner where you can edit. Being that this sort of feature has been standard for many other platforms, it’s odd that it wasn’t already part of this one. Perhaps, and I could be wrong here, it may not be such a horrible thing for Musk to take over the ownership of Twitter.

On April 25, 2022, Barron’s published an article illustrating how the stock value rose by 5.9% after the announcement of his takeover bid. There was significant skepticism around the deal, and still is as the details are getting ironed out. Even the “…company’s board went so far as to adopt a so-called poison pill to thwart Musk’s proposal. But Twitter grew more receptive to the bid after Musk said last week that he has the funding to take Twitter private.” But what does this mean exactly? When something becomes private, it sounds like it might be more exclusive or require paid subscriptions. However, in this case, it means that Twitter’s stock would no longer be available on the New York Stock Exchange. The company, per CBS News, “would also likely be freed from having to give regular updates about its business to U.S. regulators and Wall Street… have more freedom to make…changes.” The prospects of these changes may seem dire to some, but it appears for now that things may be going well. According to an Associated Press article on Fox13now, “Twitter’s quarterly profit, revenue, and the number of daily users on its platform are rising but its quarterly report…offered scant details…The social media company on Thursday reported a net income of $513 million, or 61 cents a share, but that includes a big one-time gain from the sale of its MoPub business.” It’s clear this purchase by Musk could easily mean favorable changes in the future, and it should encourage some that he’s already made clear some of his ideals.

He’s not a politician, but people all over the political spectrum both love and hate his views. Now, some are very concerned about how his views will dictate the future of the company. His current Twitter following is 88.3 million strong, and his tweet on April 27 illustrates fairly well how he feels Twitter should handle politics. He states, “For Twitter to deserve public trust, it must be politically neutral, which effectively means upsetting the far right and the far left equally.” Oddly enough this is very similar to how libraries address collection development, but I digress.

The day before he addressed the question many had been talking about concerning one of the reasons why he purchased the platform. He’d already said (as mentioned above) that Twitter was a town square of sorts, but with that comes the need for free speech. Some people these days have openly disparaged the amount of speech that is freely given, especially when it offends them. Musk, however, has laid bare his opinion on the matter: 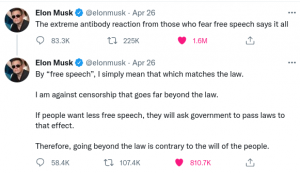 It’s obvious to me that he has good intentions at the moment, as he’s trying to make this platform into a free speech area as it was meant to be. We will all see in the coming days just what that entails for everyone. What do you think? Will his takeover result in positive changes? How do you think the changes to Twitter might impact the rest of the information world?