In March we looked at how the libraries in Ukraine were coping with the continued attacks by Russian forces. They’d become bomb shelters, food pantries, were making camouflage for the military, and being their usual hive of information and discovery. These incredible organizations are managed by amazing people though, who’ve suffered much and are still serving their communities.

In April, IFLA posted a statement on their site in support of how the international community and the librarians have dealt with this horrible circumstance. They state, “In the face of unspeakable hardship, library professionals remain dedicated to their mission of serving communities, safeguarding cultural heritage, and enabling access to reliable information for all.” IFLA had been under some heat earlier in the year when the ULA expressed concern about the lack of verbal support from them. Its been made clear now though, that the ULA and all of its libraries have the full support of the international community as they remain in a war zone.

Numerous librarians are effected by the war, and Outlook India shared an article about it, part of which states, “Libraries themselves have taken the brunt of the Russian shelling. ULA shared images of war-ravaged libraries in Chernihiv. After the shelling by Russian troops, the city’s central library as well as children’s library were damaged and no longer remain functional.” In all likelihood everyone has seen some images depicting the destruction and chaos in the war torn region, but to target libraries is unadulterated evil. Especially knowing full well that children are likely hiding in there. On April 13th the ULA shared on their facebook page an update from the Public Libraries of Lviv. The beginning of their post reads like a dystopian novel, but as we know this is all too real:

“Day 4️⃣9️⃣  the war. Our struggle continues. The whole world sees that we are struggling with true evil.” They go on to talk about the resilient librarians and the services they’ve managed to offer. “…In addition to providing temporary shelter, we try to calm people down and motivate them. Organizing a variety of workshops, art therapy classes, psychological sessions, drawing postcards for our frontline defenders.”

While these continued efforts on the ground to support the troops and community needs are hugely significant and noble, they are also assisted from their international colleagues and volunteers.

When a library in Ukraine is attacked, bombed, and so forth it immediately impacts that buildings structure and ability to maintain its servers. This problem is being addressed by a rag-tag team of 1,300 librarians who are working to backup the servers of every library in Ukraine. A librarian at Bucknell University stumbled upon a historical Ukrainian website which she then decided to preserve by scraping it. Per the article on MSN, “the original website is lost, its server space likely gone to cyberattacks, power outages or Russian shelling. But thanks to her, it still remains intact on server space rented by an international group of librarians and archivists.” The group has been named Saving Ukrainian Cultural Heritage Online, and the “efforts…have resulted in over 2,500 of the country’s museums, libraries, and archives being preserved on servers they’ve rented, eliminating the risk they’ll be lost forever.” Given how many of the libraries have come under attack, like the one pictured below in Maripol, its extremely important work which the Ukrainian librarians likely have little time or resources to accomplish themselves.

The Mariupol Central City Library as of April 18: 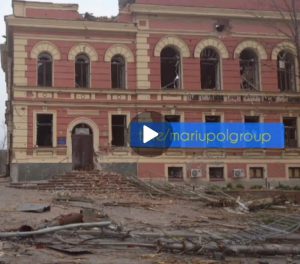 Destruction of the Mariupol Library

The entire library is obliterated, the remains looking like something from a horror film. The Chernihiv Regional Library for Youth was also bombed, leaving little behind but a shambles.

Because of destruction like this, the efforts by the volunteers to preserve such vast amounts of data, per the MSN article, has become “a lifeline for cultural officials in Ukraine, who are working with the group to digitize their collections in the event their facilities get destroyed in the war… underscores how volunteers, armed with low-cost technology, training and organization can protect a country’s history from disasters such as war, hurricanes, earthquakes and fire.” Its basically a “virtual data rescue session” which started on February 26th on Twitter by Anna Kijas. Creating these archives helps to ensure that even when the buildings are destroyed, there is hope that most of the collections will still be available somewhere. As the heroic librarians in Ukraine fight to stay alive and help their communities, its vital for their international counterparts to keep pursuing this work of preservation.

The Ukrainian librarians determination to keep going, working, and hoping for the future is an inspiration to many. Their models of service and patriotism a noble example of hardy librarianship.