Ukrainian Libraries and Librarians Working Together

The volatility in Ukraine has given rise to many people answering the call to support Ukraine in various ways. Political figures, regular citizens, and now librarians. As misinformation and cyber attacks have escalated with this war, the Ukrainian librarians are ready.

Typically librarians are not associated with violence or war. Rather, they are usually found assisting the masses in the pursuit of information. Often they are stereotyped as cat-owning, cardigan wearing, book collectors. Hardly the type of person you’d picture wielding a gun storming into battle. However, like the librarians of the past, they too are adapting to change. This ability to adapt is usually part of a librarian job description, but in this case it takes on a whole new meaning.

The situation in their country has changed, and like their fellow citizens, they have also declared their allegiance to Ukraine. Pledging to keep going, fighting on the front lines of misinformation and possibly taking up arms.

Based on the declarations in the linked article below, they are bravely fighting misinformation at a time and place where accurate information can mean life or death for many.

The statement from the Ukrainian Library Association illustrates their situation in an increasingly war torn country as they battle misinformation and cyber attacks. They continue to serve their communities as well as they can while they work to ensure there is accurate information accessible during a time when there is far too much false information out there.

Many across social media have praised them, cheering on the librarians and sharing the translated article. They have been referred to as “badass” and rightfully so. It takes courage to stand up in times like this, especially in a war zone.

Another part of the article mentioned that libraries were holding basic emergency medical classes, had become hostels, and care units. This is probably not what the “other duties as assigned/needed” portion of their job description meant, but there they are anyway. Supporting the community as best they can. This is what librarians do. Help their communities in any possible. Even when it comes at great expense to themselves.

A separate statement regarding their new initiative to create a digital library was shared on twitter and their website. Despite everything going on, they are working to create a digital archive about the war. They included instructions for librarians across the world to provide digital documents as well. Encouraging others to locate and work on the project with them so there will be a variety of digitized items acquired.

The collection development process will undoubtedly be painstaking, but worthwhile when there is a “free and independent Ukraine” as stated in the link above. When they are successful, this project will be an amazing accomplishment. A digital library created at the same time it’s subject is developing.

Hopefully this mess will all be over very soon and these courageous librarians can do their jobs without fear. If the mainstream news and videos loaded to social media are any indication, it may be some time before any sense of normalcy is restored. In reflection of this possibility, the Ukrainian Library Association has posted an appeal on March 2, 2022 asking information companies to cease business with Russian clients. The image of the appeal is below: 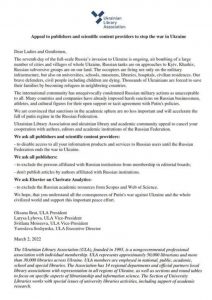 The fact that libraries and museums are being attacked shows how determined the invader is to obliterate everything Ukrainian.

Elsevier responded to state their sympathy for the Ukrainian people, and reiterated their stance on academic publishing. See images below: 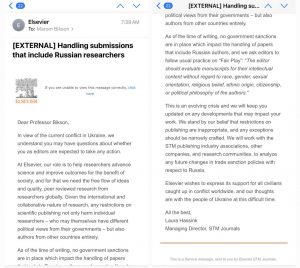 Clarivate has not responded to the appeal specifically (as of when this was written). Their CEO Jerry Stead has shared a post to the Clarivate Facebook page stating they have made $50,000 donations to two Ukrainian charities which are working to provide assistance to the war torn nation.

The Library Reserve Corps released a statement also.  They voiced their support for the Ukrainian libraries, and reiterated the importance of information quality in times such as these.

The urgent issues presented by the Ukrainian Library Association have been heard across the world, and their international community of librarians have responded. As a librarian I am proud of them for taking on a massive project in the middle of a war zone. Their bravery and determination beyond commendable.

Gretchen Gardella is a Librarian with administrative, research, and vast technical skills. Ms. Gardella brings over 16 years of experience working in academic and public libraries to the discussion.