Women and Libraries: a Brief Look at Some Famous Female Librarians

In honor of Women’s History Month let’s look at a few famous female librarians. Women have been involved with libraries for ages in some aspect or other. Women can be found in several roles such as directors of major university libraries, the Library of Congress, and the volunteers at the local public library. They all care about their communities and the importance of maintaining access to quality information.

One well known librarian is Laura Bush, who was working as a school librarian when she met her now husband George W. Bush. Most people are familiar with her time as first lady, but not as many know that she was a teacher first then a school librarian. She worked aa a librarian at an elementary school until she got married in 1977, and since then has continued to advocate for libraries, education, and women.

According to firstladies.org, while she was first lady of Texas she “successfully lobbied for state funding of early reading, literacy and early childhood development programs.” Part of this effort included the creation of the Texas Book Festival which raised money for public schools and libraries to purchase much needed books. This festival is still an annual event.

Her use of her fame to benefit children in her state was just the beginning of her work in a first lady capacity.

When she eventually became the first lady of the United States she continued her work as an advocate for education, women, and libraries. After 9/11, her attention was turned more towards the plight of the Afghan women and the abuse they were suffering. Later on she launched an initiative called “Ready to Read, Ready to Learn”. This was designed to achieve 2 goals as pictured below: 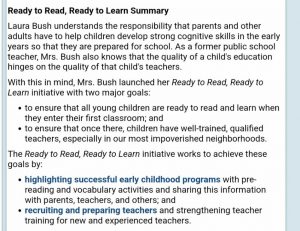 Her work also included helping her husband with the No Child Left Behind Act, and continuous work since then to improve the lives women, advocate for education, and libraries.

Another famous female librarian is Audre Lorde (1934-1992). She is known for her poetry and involvement in the LGBTQ community, and civil rights movements. As a child she grew to love poetry and used it to express herself. She submitted her writing to Seventeen magazine and it was her first published work. According to Literary Ladies Guide she “shifted her writing from themes of love to more political and personal matters. She used her platform as a writer to spread ideas about intersecting oppression’s and experiences faced especially by women of color.”

Using written words to help further the cause of all three movements is ambitious and admirable. Especially since she was part of two minority groups which at that time were not as encouraged to speak up as in present time. She attended college at Columbia University where she earned her Masters degree in Library Science. According to The Amsterdam News “Lorde earned her master’s degree in library science at Columbia University and at the same time worked as a librarian at the Mount Vernon Public Library… Four years earlier, she became the head librarian at Town School Library in New York City and held that position until 1968.” She spent most of her life and career writing poetry, and living in the world of academia as a literature professor, poet, and librarian.

Henriette Avram is known as the creator of MARC. Born in 1919, she started out pursuing a career in medicine and even took pre-med classes in New York. She left college when she married, as was common back then, and eventually moved to the DC area with her husband when he worked in the NSA.

According to loc.gov she continued her pursuit of education by taking classes at George Washington University and became a systems analyst for the NSA. She spent some time there before accepting a job at Datatrol, during her time there she attempted “to organize the firm’s library brought her into contact with cataloging concepts. Becoming more and more interested in the idea of a bibliographic utility” according to jwa.org.

She already had a love for learning, just like the two previous librarians discussed here, and working with the firms collection clearly inspired her to think of other libraries. According to loc.gov “…She and a small team completed the MARC Pilot Project in 1968. The system quickly became the preferred format for libraries … around the globe.”

As all librarians know, MARC is part of metadata management life now. It helps us organize everything in our libraries, and gives us a way to definitively say what goes where in a record. Despite Henriette Avram not being an official librarian with an MLIS/MLS she “launched a revolution in libraries” and was “one of the century’s most influential library leaders.” (loc.gov)

All librarians can relate to some degree with the ones discussed above. The appreciation for keeping information organized, advocating for libraries and education, and using their notoriety in novel ways (pun intended) to help bring change to our world.

Gretchen Gardella is a Librarian with administrative, research, and vast technical skills. Ms. Gardella brings over 16 years of experience working in academic and public libraries to the discussion.

Editors Note: We apologize for this belated post, which delayed due to some technical difficulties on our end.