Library of Hope and Healing: Uvalde 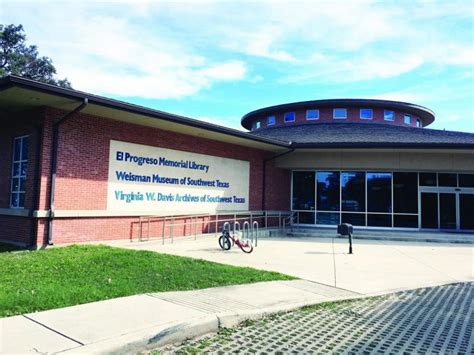 In May, the news reported a horrific mass shooting at the Robb Elementary School in Uvalde, TX. It shook the town, country, and world as our children were not safe in school once again. The community reeled, trying to make sense of everything but unable to do so. Parents face the future without their children, and other children are traumatized and injured. The future looked grim, dark, and foreboding. What good could come from such a tragedy? How could anyone think that using weapons against children solved their problem? Like a phoenix rising from the ashes, Uvalde’s El Progreso Memorial Library stepped up to comfort and heal.

Established in 1903, El Progreso Memorial Library has served Uvalde and Southwest Texas for 119 years. Since then, the town has undergone many changes, including the library’s founding and establishment. A local teacher, Annie Robb, who the school was named after, according to TPR.org:

“…believed in self-improvement, and she joined like-minded citizens at El Progreso Club, which was dedicated to both self and civic improvement. One of the projects Robb and her team focused on was building up the town library, and for more than a decade they oversaw a growing collection of books… In 1918, they made it all free to the public. A short article in the San Antonio Express about the dedication ceremony added that by then the library held 2,000 books. The library also needed a secure financial footing — only community donations kept the doors open and free to visitors. By 1926, Robb and her group convinced the Uvalde City Council to permanently fund what became El Progreso Memorial Library.”

Annie’s legacy was spotlighted in the days following the tragedy. Education and the children of Uvalde were a large part of Annie’s life. “The building was named Robb Elementary School a few years after Robb died… The focus of Robb’s life was education…the children of Uvalde are their children…,” according to TPR.org. Her namesake is the school, but her legacy is the library.

The violent attack greatly affected the staff of the library. As Mendell returned to town, he had a “surreal” experience, according to Today.com. “Mendell Morgan…was driving back to Uvalde from San Antonio, Texas, when the unthinkable occurred. His staff notified him that something horrible was happening at the school just a few blocks away. Some of them heard the shots. Morgan says the drive into Uvalde was “surreal,” as he had to “pull over multiple times” for several law enforcement vehicles and ambulances speeding towards Uvalde, and he watched ambulances and helicopters leave in the opposite direction.” Driving into the chaos, knowing what he was about to face, he also had to think about how the library could help. In his interview with Today.com, he s  aid, “My first response was that we should close the library, as a sign of respect,” Morgan explained. “Then I reflected about it and realized there was nothing we could do to help the victims or their families by being closed. Rather, my thought was: We need to be as normal as we can for those who have survived.” It’s vital as a community library and namesake of Annie Robb for the children to have a place to go. The librarians tried to keep going with the day like normal and even managed to host their usual story hour.

Once the director decided to open the next day, he created a book display containing items about grief, coping, and loss. 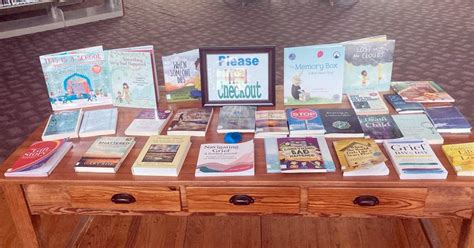 Knowing the community would be reeling, it was important for the library to have the needed resources. According to Today.com, volunteers have created “the group set up a community relaxation room in the library — known as the “Soft Space” —  with beanbags, blankets, snacks, bottled water, and soft drinks. Members of a nearby church filled the room with handmade quilts, free for anyone who wanted one. 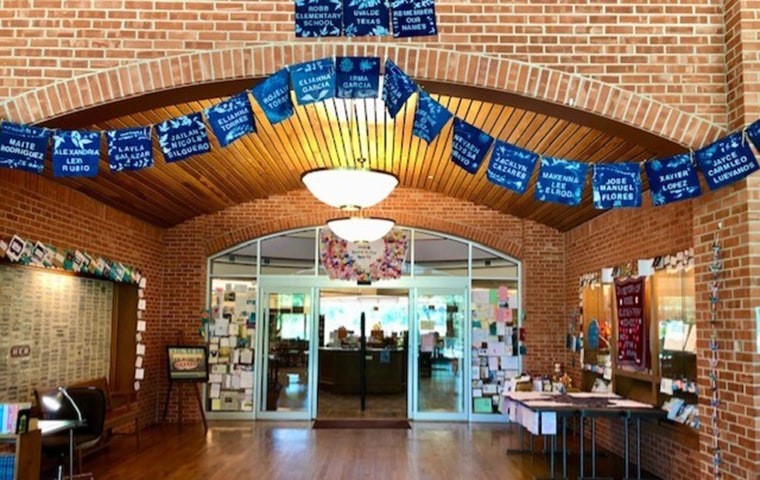 El Progreso Library’s “Tunnel of Love” in honors the victims of the Robb Elementary School Shooting.Courtesy of Mendell Morgan

Other volunteers have offered massage therapies, yoga classes, art therapy, and clay workshops…The library even hosted bunnies and miniature ponies.” The focus on healing and creating positive energy was sustained for quite some time. It included a large event on “June 12, when bodybuilders, acrobats, and actors impersonating superheroes brought $10,000 worth of toys, 1,000 snow cones, hot dogs, ice cream, a bubble truck, and bounce houses. For an entire day, Spider-Man and Spider Gwen, Wonder Woman and Superman, Minnie and Micky Mouse, and the Ghostbusters all took turns reading to thousands of children and their parents.”

The event was a huge success, and afterward, one of the board members stated to the director “…the thesis of the Biblical scripture Esther 4:14,” Morgan said, in which Esther’s uncle tells her that perhaps she was born for a time such as this, to save her people. “She (board member) said, ‘Mendell, this library is here for a time such as this.’ I thought, ‘Wow, that’s profound. That’s powerful. And I believe you’re right.’” The whole town was grieving, and the library met them in that grief while making it possible for smiles to happen. One of the parents told the director, “For the first time since this tragedy occurred, I’ve seen my child smile’.”

There is still anger and sadness, but this library has become a ray of hope in a cloud of darkness and solace to a grief-torn town. It brought a sense of normalcy during the chaos. What this town went through was unspeakable. A parent should never have to bury their child.