I’ve seen countless articles lately with sensationalist and misleading headlines. The same problem persists in all my social media feeds and mainstream news sites. There’s no fixing the problem from the publisher’s end of things (at least not any time soon), so it’s essential to use your judgment and know what to look for.

The best weapon against fake news is critical thinking. If you can think and analyze critically and quickly, sensationalist news stories won’t have as much of a chance of influencing you. Recently, a news station called KGUN in AZ published a report about misinformation. They talked to journalism students at the University of Arizona about their experiences and education concerning fake news. They had all seen instances of it on social media, and one of the professors talked about why people often believe false narratives. Professor McKisson stated, “You see something that you want to believe that already goes to your own beliefs or your sort of background. You don’t want to check it out because you want it to be true,”. This is especially the case with political, social, and religious issues.

In 2016, when Fake News became a household term, the Huffington Post published an article addressing the matter. The nine best ways to tell if a news story is fake are as follows: 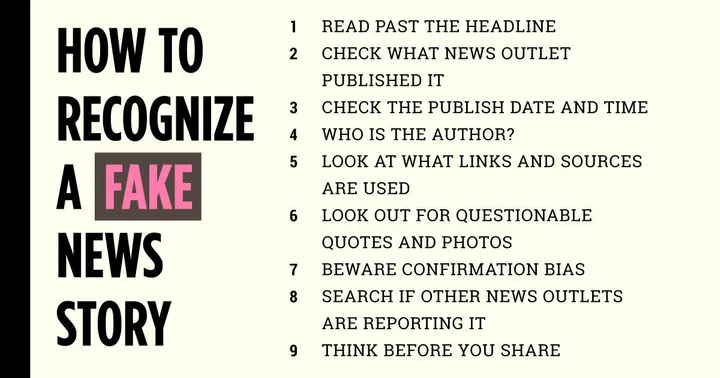 Be careful out there. It’s easy to see a news headline and think it’s true (or want it to be). A rhyme I use to remind myself is: Think before you post and share, there’s lots of fake news out there.

What’s the craziest fake news story you saw? How did you know it wasn’t real?