Say what? A Look at Banned Books

Throughout history books have been deemed unacceptable for various reasons. Schools and libraries are often forced to explain their reasons for selecting a book for their collection when it’s deemed offensive by others. Per Barnes and Noble “Typically, books were banned on moral, religious, or political grounds. They were believed to be obscene or too controversial to be read by society.” Librarians , scribes, and scholars alike have faced the scrutiny of others concerning the books they have allowed in collections. Let’s look at some of those books and the reasons why they were banned.

Long ago in China there was an emperor named “Shih Huang Ti … buried alive 460 Confucian scholars to control the writing of history… (and) he burned all the books in his kingdom … With all previous historical records destroyed, he thought history could be said to begin with him (freedomtoread.ca).” This attempt to control history is hardly singular to this emperor, other rulers have also made similar efforts.

Caligula was a Roman ruler famous for his harsh nature. His court is even referred to in a television show called Frasier which aired in the 90’s. Caligula banned The Odyssey by Homer because “He thought the epic poem was dangerous because it expressed Greek ideas of freedom (freedomtoread.ca).” Clearly this ban didn’t work out since The Odyssey is now considered classic literature and read worldwide.

In the 2010’s there were several books banned according to research documented by the ALA. “The American Library Association’s Office for Intellectual Freedom (OIF) has been documenting attempts to ban books in libraries and schools since 1990. OIF compiled this list of the most banned and challenged books from 2010-2019”: 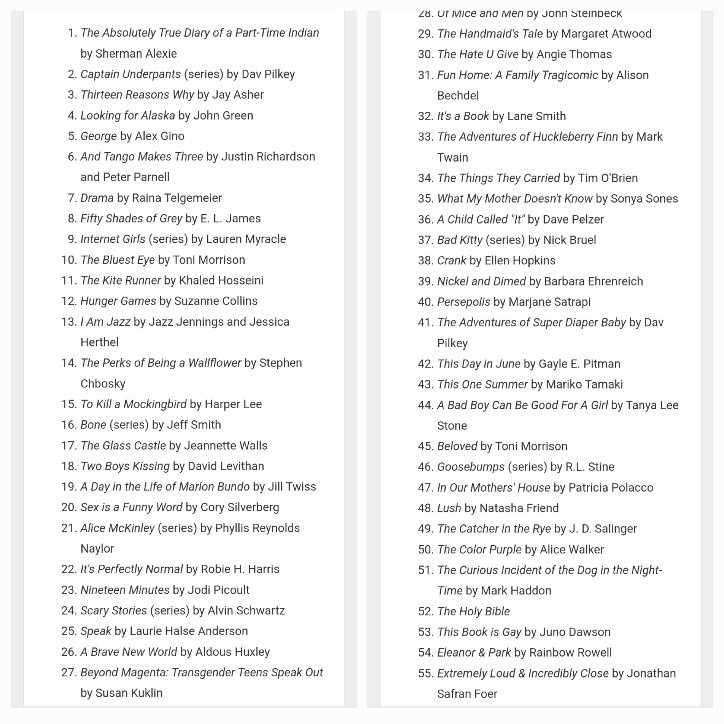 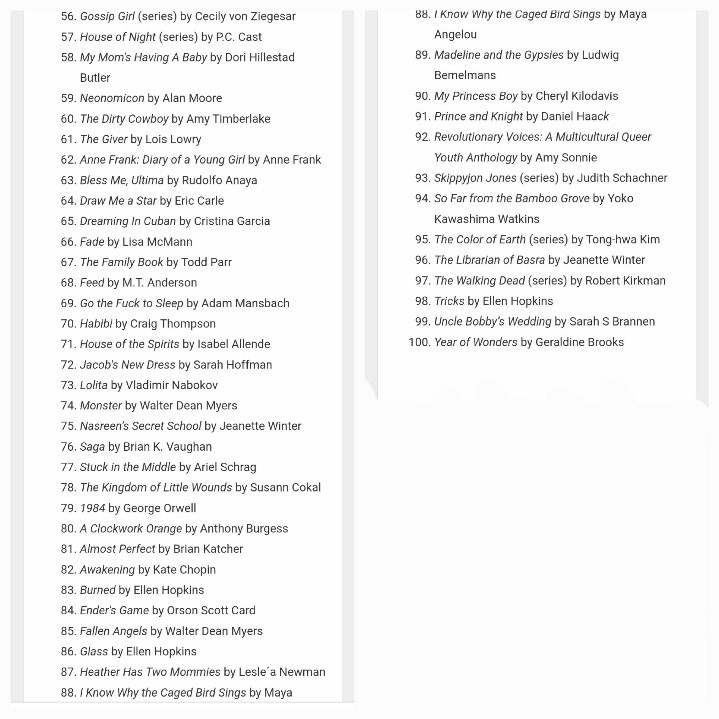 This list is also referenced by a Business Insider  article where they talk about why some of these books were banned. For “To Kill a Mockingbird” the reasons given for people wanting it banned are “racial slurs and their negative effect on students, featuring a ‘white savior’ character, and its perception of the Black experience.” This book was required reading for many students, and has been made into a movie as well as a Broadway show.

The story of a cute little bunny named Marlon Bundo was also controversial due to “”designed to pollute the morals of its readers,” and for not including a content warning” per the Business Insider article. The book was even featured on Last Week Tonight with John Oliver in March 2018 according to the Huffington Post.

Back in 2017 Netflix debuted a show making “Thirteen Reasons Why” skyrocket in popularity.  Deemed problematic, the ALA states it was “challenged and banned in multiple school districts because it discusses suicide.” This concern was founded on research though, as detailed in an article by the NIMH (National Institute of Mental Health). “The Netflix show “13 Reasons Why” was associated with a 28.9% increase in suicide rates among U.S. youth ages 10-17 in the month (April 2017) following the show’s release, after accounting for ongoing trends in suicide rates, according to a study published in Journal of the American Academy of Child and Adolescent Psychiatry.” Netflix responded to the study by stating ““We’ve just seen this study and are looking into the research… This is a critically important topic and we have worked hard to ensure that we handle this sensitive issue responsibly.”

Several years back the Harry Potter series was also controversial as it was said to be “referring to magic and witchcraft, for containing actual curses and spells, and for characters that use “nefarious means” to attain goals (Business Insider).” The books were challenging for some religious organizations, as they appeared to make witchcraft and wizardry appealing to children. I remember it being a topic of significant discussion, and not being allowed to read them.

In 2020, “George” by Alex Gino was considered to be controversial as well, due to “LGBTQIA+ content, conflicting with a religious viewpoint, and not reflecting “the values of our community” according to the ALA. Considering that people of all kinds are part of the community, it’s hard to see how this book wouldn’t reflect that diversity.

Many books have been considered to have a negative influence on students, and some of those were successfully banned. It remains a matter of community opinion if a book should be banned, but ultimately its up to the librarians if it actually is.