When I say I have a MLIS, the usual next question is “what’s that?” To which I respond by saying the full name of the degree it took me 2 years to complete. It’s been my observation that many people don’t know it usually takes an advanced degree to become a librarian. Should it though?

The first educational program for students to study Library Science was “founded at Columbia University, by Melvil Dewey, in 1887.” Over the next several decades, other library schools took shape. Now there are, according to the ALA, 64 educational institutions offering accredited programs for some type of librarianship.

I posted a poll in a librarian group  on Facebook to get a better idea of what others in the library community think. It didn’t take long before numerous votes and replies piled in. 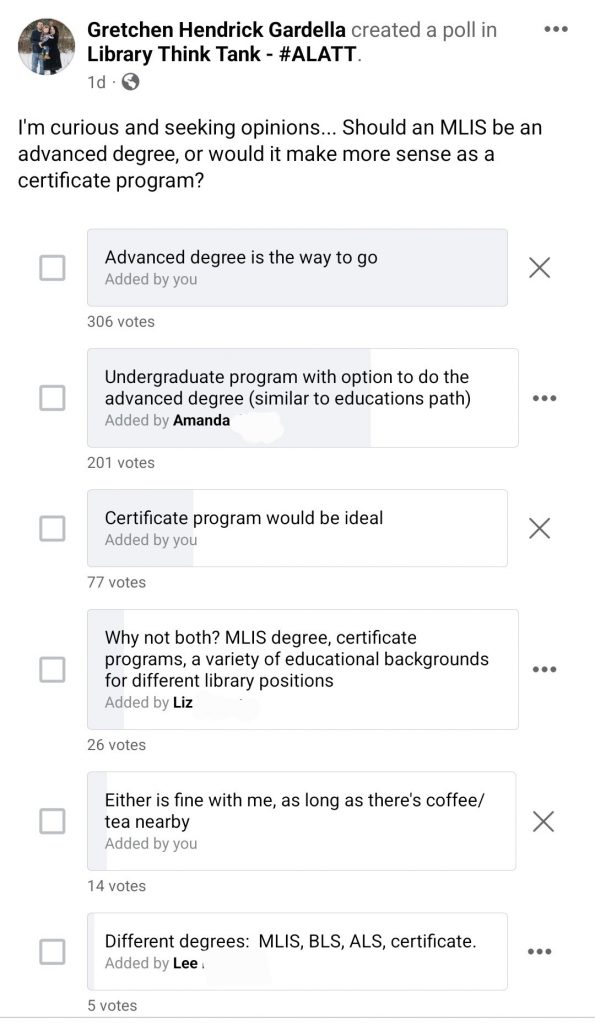 There were three options initially but as you can see a fourth and fifth were added. The responses to this ranged widely, and certainly sparked some debate. Some were lighthearted replies and other were clearly agitated. No consensus was reached, but one was not expected either. Instead with the added poll categories there was more variation in opinion voiced.

A well-liked response posted by Joshua K. stated “Given that an MLIS is as much management training as it is academics, there should be undergraduate and associate training programs that promote a variety of options for those looking to pursue a career in libraries. If you just want to be a happy worker bee in the cataloging department? Cert training in the field. Run a massive metropolitan system with a budget of millions? Get the masters.” This received 26 likes and hearts, and was one of the first responses to the poll. It makes sense though, as many library staff positions are filled with people who do not have a MLIS/MLS.

Having more diverse options available from the get go was brought up by another responder. Susan stated, “In our modern world, starting with associates programs that can step up to undergraduate and advanced degrees would help more people. It would certainly improve the skills of lower level applicants.” If this type of degree hierarchy existed it would likely look something like nurse programs. Where the student starts as a CNA first before moving up as they gain more certifications or a degree. This would even be a good option for those who are in underprivileged populations and would like to pursue a career in information science.

Library type work can be done in just about any field, but having options would certainly benefit more people. As Nathan M. points out in his response to the poll, “I think options are good. An undergrad degree could be a good option for non-managers, and a grad degree for managers. Would allow further specialization between the two. A certificate as a third option for those with an undergrad degree not in library science, would also be rad for this envisioned system.” This also makes sense and is similar to what the others have said. A more advanced degree could be required for those who wish to pursue a more prestigious role. An associate level position, considering the lower pay that often coincides, could realistically require nothing more than a certificate or two.

The results above in the final updated poll show that the majority (306 votes) still believe an advanced degree is necessary to be a librarian. The next (201 votes) was for a category added by one of the voters which states “undergraduate program with option to do the advanced degree (similar to educations path).” 77 votes were all for a certificate program being sufficient, and 26 votes for incorporating both certificates and degrees.

14 people agreed that either is fine so long as coffee or tea is nearby. As many librarians know being caffeinated and warm is important to daily life. The final category was added by another voter and reiterated to some extent what the previous categories stated.

The votes and responses all did agree on one important thing. That some type of specialized education should be required for those who wish to be librarians.